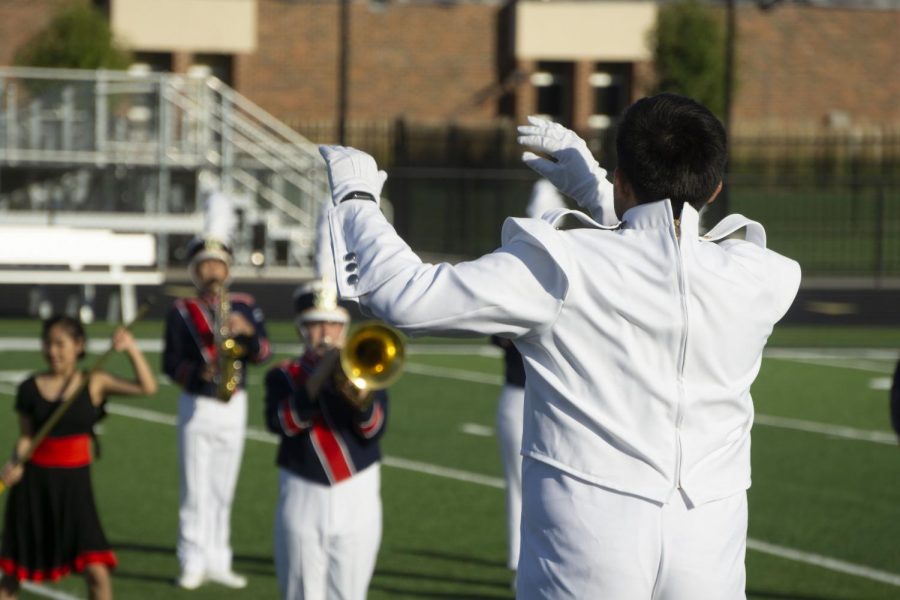 The ALHS band is marching to the beat of an exotic drum this season with their show, “Spanish Images.” After months of preparation, the marching band competition season has finally begun, with their first performance on October 12 at Glenwood Field Fest, where they scored second place in class 4A, and won awards for outstanding drum majors and outstanding soloists.

“Spanish Images,” arranged by Jay Dawson, is a show comprised of three songs, and follows the story of a Spanish matador’s experience fighting a mighty bull. The first movement, Estancia, introduces this concept through a high-energy and grandiose melody. The next movement, Novus, represents the killing of the bull, and takes on a more somber and emotional tone. Santana is the third and final movement, and encapsulates the bittersweet celebration following the demise of the bull through buoyant Latin-style music.

“I have enjoyed teaching (and learning about) the cultural concepts my students have so enthusiastically embraced,” ALHS band director Taylor Matuszeski said. “To watch them share and learn about the language, history, rhythmic challenges, and how to dance to it all has been fun.”

At a typical marching band competition, anywhere between 10-20 bands will perform for up to 15 minutes. As each band performs, six judges will evaluate specific categories of the performance, including Marching & Maneuvering General Effect, Marching & Maneuvering Execution, Music General Effect, Music Execution, Percussion, and Color Guard. Points are given to each band in each category and the more points earned, the higher your placement.

“It’s like a sport, so every time you perform it you feel a lot of adrenaline,” senior Jesus Vega-Lemus said. “You get that feeling of accomplishment when you finish, and being able to spend time with the band and face hardships together is the best part.”

For some members of the marching band, the competitions are an opportunity to show their artistic side. Color guard, for example, provides visual aspects to the performance through choreographed dance and flag spinning.

“In color guard, you get to express yourself a little bit more,” senior and color guard co-captain Ashley Hipnar said. “Your goal is to become an actor and make the audience feel something, which is my favorite part.”

On October 5, the band participated in a “Showcase Day” at the Gale Wickersham Athletic Complex. The event was an all-day rehearsal and celebration of the beginning of the marching season. On top of being an opportunity to get accustomed to marching on a competition field, the showcase served as the band’s senior night, in which the twelfth-grade band members received their gold braids.

“It was really cool because it’s now hitting you that you’re a senior in the band and you’re being recognized for all your hard work,” Hipnar said.

As one of two drum majors in the band, junior Rolando Martinez-Rico was tasked with presenting the seniors with their braids at the showcase event.

“As I was giving the seniors their braids, I thought of the memories I had with everyone and just how next year is going to be different without them,” Martinez-Rico said. “I’m very appreciative of them because they have helped me grow as an individual.”

The event was an emotional start to the marching season, not only for the seniors, but for others, too. Matuszeski remembers his experience receiving his braids as a senior in high school.

“Being an alumni of the band, I understand how much those braids mean,” Matuszeski said. “It’s a recognition that many longingly await and earn for investing 3-4 years into the growth of themselves, the collective band family, and the music we make together.”

Marching band is an activity characterized by discipline and dedication; it takes a lot of hard work to make a show come together. However, many band members would agree that with all the hardships come valuable experiences.

“To me, the best part has been the time we spend together working towards a common purpose,” Matuszeski said. “Marching and playing an instrument is extremely demanding. Every student, every year, proves to themselves that they are capable of simultaneous mental and physical growth. Regardless of the challenge, we support, encourage and motivate one another for the sake of making and sharing music and to realize our greatest potential together.”